Here’s How Kerala Can Overcome Its Post-Flood Health Hazards

As the nation watched in horror, torrential rains lashed and battered at Kerala, leaving 350 dead and thousands homeless. Spirited volunteers and the army have succeeded in rescuing 80,000 people despite adverse conditions and 2, 23,139 people are temporarily housed in over 1,500 relief camps.  Even as Kerala rallied bravely in the face of such a national calamity, it might well have to face another calamity on epidemic proportions.

As floodwaters recede and rehabilitation efforts are yet to be afoot, there are severe risks of water-borne and vector-borne disease outbreaks. Even as health authorities prepare themselves for some serious damage control, the state has already recorded 225 cases of leptospirosis, 846 cases of dengue fever, 518 cases of malaria, 34 cases of chikungunya and 191,945 cases of acute diarrheal disease; with the numbers rising. Conditions as of now are conducive to the spread of diseases owing to overcrowding and low sanitation. Here are the potential disease outbreaks Kerala needs to watch out for.

Leptospirosis is a bacterial disease with severe repercussions such as kidney and liver failure, meningitis, breathing difficulty and hemorrhage. This illness may turn out to be the biggest challenge as people have been wading through floodwaters without proper protection. As the floodwaters are infected with urine of rodents, dogs and other livestock, the bacteria may enter through cuts on the skin.

Hepatitis A, a contagious liver infection is caused by the Hepatitis A virus. This waterborne viral infection is transmitted by flies and by drinking water and food contaminated by feces of an infected person. Sewage mixed with floodwater poses a huge risk of getting the infection. Uttarakhand saw an outbreak of Hepatitis A after the 2013 floods. Cholera is a potentially fatal bacterial disease that can be contracted by consumption of contaminated food or water as well as by living in unhygienic conditions. The alarming part is that cholera causes severe diarrhea with watery stools and vomiting. Within a few hours of this kind of diarrhea, the patient suffers from extreme dehydration and water loss. If not treated immediately, this can lead to death.

Gastrointestinal diseases are a given in the aftermath of floods. The mingling of sewage with water can contaminate drinking water giving rise to E. coli infections, dysentery, diarrhea and dehydration.

Being exposed to dirty water or drinking infected water can lead to typhoid which is a water-borne disease. The infection is caused by a bacteria known as S. typhi which is transmitted through food or water contaminated by the feces of an infected person. S.typhi can survive in dirty water or exposed sewage for weeks.

Wading through dirty flood water can increase instances of parasitic and fungal skin infections owing to waterborne pathogens. Eczema is one of the common skin infections caused by flood-like situations. Skin macerations, urticaria, dermatitis and scabies are other possible infectious skin disorders. 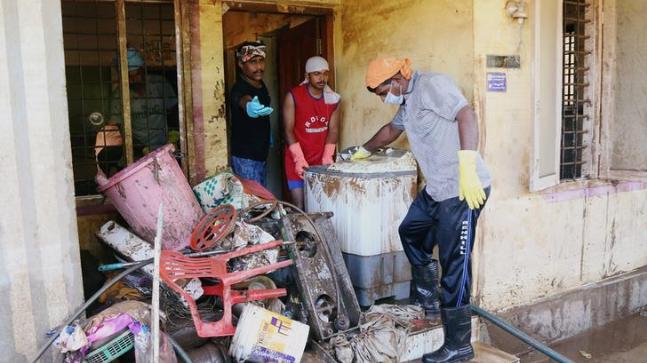 Though flooding may flush out breeding mosquitoes, the stagnant pools it leaves behind are perfect for mosquito breeding. Also relief centers which are crowded, help foster the spread of diseases such as malaria and dengue.

The floods left wild or stray animals dead in its wake. Health care workers who move animal carcasses are prone to health risks if the dead bodies had cholera or hemorrhagic fevers prior to death. Without adequate protective equipment, it is possible to contract tuberculosis, gastrointestinal infections or blood-borne diseases. Prevention is the best cure

There are thousands with nowhere to go. Even those with homes which are only partially damaged cannot return without having their homes cleaned and sanitized. After the aftermath of the flood, the Kerala government’s second challenge is to prevent an epidemic. There are several measures that people can take to safeguard themselves from diseases.

The government has stepped up to provide medical aid should people need it. The Health Ministry has set up over 3000 medical camps with health professionals. Over 90 types of medicines have been kept in stock for foreseeable medical emergencies. In case, any symptoms are visible one must consult a medical professional to stop potential diseases from progressing further.